Exchange student Michel Fontaine's report on his summer's work at the University of Oxford, which included an acknowledgement of "Automatic Reply: Prof. C. Newman, for his constant encouragement and helpful suggestions," has left his former labmates scratching their heads.

"We can't work out if it's a joke or not," explained third-year graduate student Graham Lewis, who supervised the French chemist. "We've spent the whole summer trying to distinguish deadpan humour from genuine language difficulties. I don't know if there's a French word for impenetrable, but if there is, that's him all over." According to Lewis, Fontaine's research interests include quantum dots, carbon nanomaterials, and hand-rolled cigarettes.

Despite the promptings of postdoctoral researcher Bruce Gilbert, Prof. Newman seemed confused about the summer student's identity. "Michel? Of course I remember her. Three months' worth of free labour seems like a good deal, but then they send you a stocky French girl with a moustache," he blustered, as Gilbert stared at the floor and shuffled uncomfortably.

C&EN Onion attempted to contact Fontaine for his side of the story, but he proved as transient as one of his trademark enigmatic shrugs.
Posted by C&EN Onion at 11:18 AM No comments:

After six years of post doctoral research, UCLA chemist Jordan Watkins, PhD., has secured a tenure track assistant professorship position, sources within the university state, after reportedly agreeing to a Faustian bargain with The Prince of Darkness.  Daniel Stephenson, a graduate student and labmate of Dr. Watkins, indicated that the Dark Lord of the Abyss and Purveyor of Suffering was summoned to lab bench of the latter, shortly after coming to the realization that, at 34 years old, he "should be a professor or something, not stuck in this goddamned hell-hole."

In an interview with our staff, Watkins laid out the terms of the agreement between himself and Lucifer, the Unholy Abomination from Beyond.  "Well, I summoned him in the usual manner: pentagram drawings, candles, incantations, the blood of an undergraduate student, you know, typical stuff.  Pretty much, I get a tenure track position at UC Riverside in exchange for an eternity of suffering in a burning lake of sulfur."

When reached for comment, The Master of Demons indicated that Watkins had initially demanded placement at a top-five institution in exchange for the eternal torment of his immortal soul.  "He wanted me to put him at Harvard.  Harvard.  Come on, what does he think I am, a miracle worker?  Told him the best I could do was a middle tier UC.  He should be grateful, really, with that kind of publication record..."
Posted by C&EN Onion at 11:11 AM 1 comment: 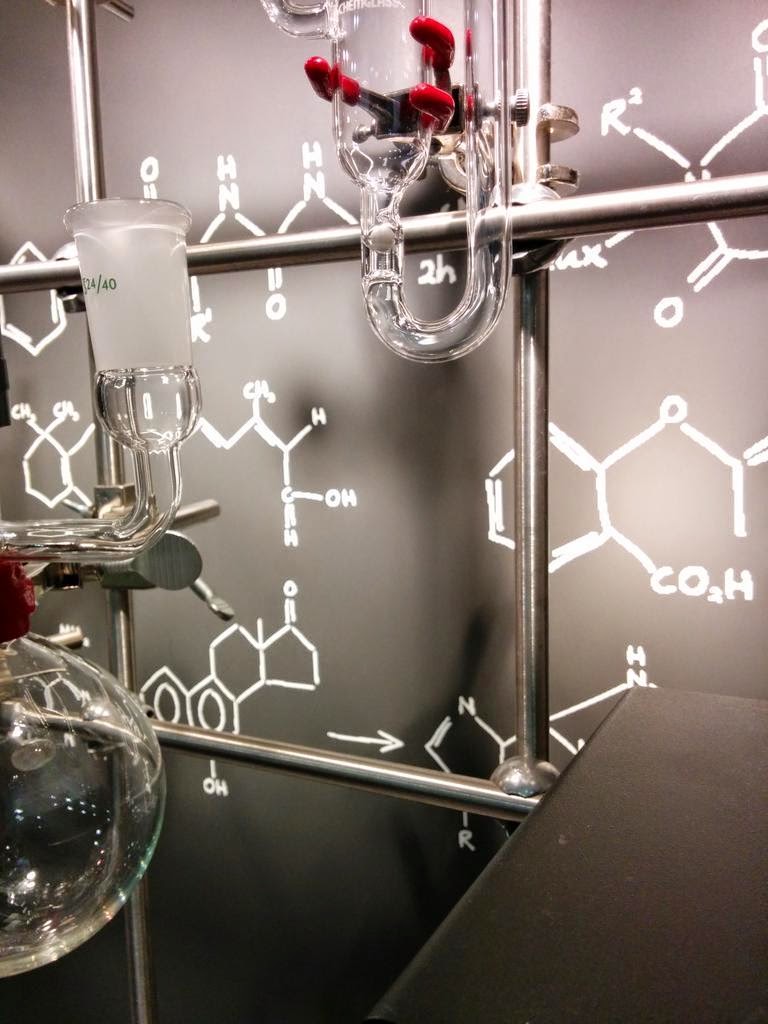 University of Liverpool student Kevin Kilpatrick remained sanguine today following the disappearance of his sample from the carousel of a communal NMR spectrometer. The second-year graduate student, working on polyketide synthesis in the Blackwell lab, believes an as-yet unidentified member of the department took the sample in order to reuse the tube, and fears the contents are already lost.

Speaking to C&EN Onion in a soft northwestern burr inflected with upbeat despair, Kilpatrick played down the incident: "It's not a big deal. OK, it's a pretty important intermediate, and 6 of my 17 milligrams were in that tube, but it's just one of those things." Bad fortune was also to blame for an earlier loss of valuable material. "I sneezed on the balance last week," he admitted.  "That did for half of the previous intermediate."

Despite the importance of the sample, the beleaguered grad student has taken no action to recover it. "Some people would have sent a screaming mad email to the entire department," he explained. "But I think the 'high importance' flag is best kept for life-or-death situations."

Kilpatrick confirmed that proton and carbon NMR spectra were acquired before the sample's removal, and revealed a contingency plan for the loss of material. "Whoever took it, they were good enough to leave me the printouts. Sure, I had planned to vac it down and send it for elemental analysis, but I can just make that up."

Prof. Blackwell could not be reached for comment.
Posted by C&EN Onion at 10:35 AM No comments:

Unemployed chemistry graduates breathed a collective sigh of relief today as the Bureau of Labor Statistics released its July Employment Situation Summary.  Taylor Baker (22), currently working on a food truck, recently received her bachelors degree in chemistry from Northeastern University.  "I'm so glad that the employment situation is looking better!" exclaimed Baker, ecstatic that unemployment in the chemical sciences at the bachelor's level fell from 4.6% to 4.2% from June to July.

"Only half of my paycheck it going to paying off my student loans.  The other half's going to rent for my Allston apartment, but at least I got approved for a $5000 line of credit!" added Baker.

James Pierce, PhD. (29), similarly expressed overwhelming relief at the present state of the job market.  "I was planning on holding off on finishing my doctorate until I had something locked down, but with these job numbers, I'll probably only be unemployed for three, maybe four months before finding a post-doc position."

"I mean, I realize that the salary numbers have been relatively stagnant for a while, but it could be worse, right?" Pierce stated of the employment situation for doctoral level chemists.  "Sure, the numbers don't count the underemployed or 'discouraged workers,' but 2.2% ain't half bad," he added.

At present time, high school junior Alex McGill was being told by his guidance counselor that pursuing a degree in chemistry in college was a "surefire" route to achieving "rapid employment" with a "great starting salary."

Scientists at the Center for Nuclear Magnetic Resonance Spectroscopy (CNMRS) at the Lawrence Livermore National Laboratory held a press conference yesterday to concede that the nuclear Overhauser effect, a central tenet of NMR spectroscopy, was a complete fabrication.

"Thank you for gathering here today," began CNMRS chairman Ben Hunt, PhD., "This has gone on long enough, and it's really starting to get out of hand."

"Look, it kinda started as an in-joke between the theoretical guys over at Varian back in the 60's.  The fact of the matter is, the nuclear Overhauser effect is not a real thing.  I mean, 'Overhauser?'  Really?  No one would ever be named that."

"Honestly?  One of the junior technicians thought we were being serious, so we just kinda rolled with it.  We really have no idea how through-space coupling works."

Dr. Hunt continued to explain the origins of the many experimental acronyms used in two-dimensional NMR spectroscopy.  "NOESY?  Come on guys, we thought that was a dead giveaway.  Then it turned into something of a competition over who could create the most ridiculous acronym.  How could a spectroscopic method referred to as 'CAMELSPIN' ever be a serious scientific procedure?"

Hunt finished by once again apologizing for the deception, saying, "Once everyone was on board, it has already gained too much momentum to fess up."  He then added, "Plus, don't even get me started on 'electron paramagnetic resonance,' am I right?"
Posted by C&EN Onion at 10:32 AM No comments: